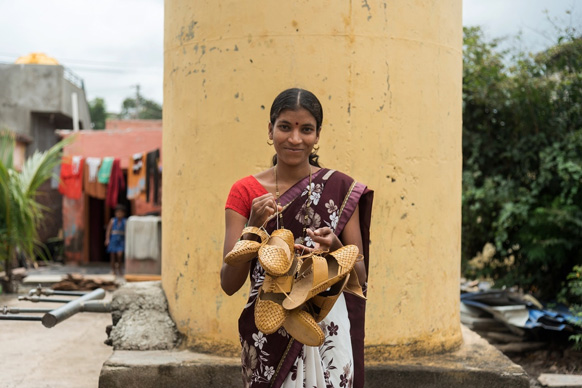 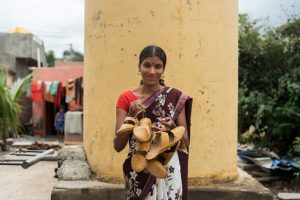 “When you leave a Desi Hangover store, you don’t walk out with just a shoe, but also a story,” claim the founders of the sustainable D2C brand. These are stories of hope and resilience, showcasing the turnaround of a marginal community of artisans in Maharashtra’s Kolhapur district.

The Mumbai startup has significantly improved the lives and livelihoods of 110 people across the value chain of the once iconic Kolhapuri chappal industry that is battling for survival against Chinese knockoffs made of sub-standard materials. Since its inception in September 2014, the company has gradually transformed the typical Kolhapuri chappal to appeal to the discerning taste of a growing ethnic-wear clientele in India and abroad. 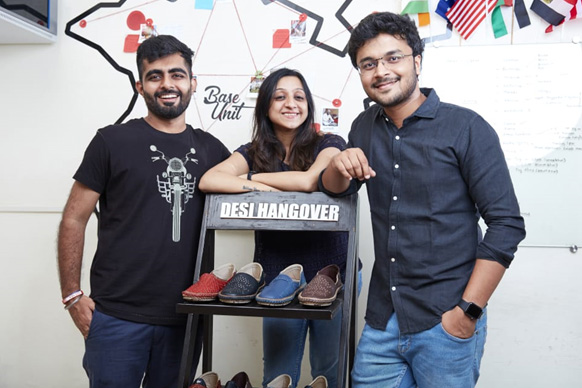 When the founders Hitesh Kenjale, Lakshya Arora, and Abha Agrawal had first travelled to the manufacturing hubs, they were moved by the economic plight of the community. With profit margins declining sharply, the artisans could only buy pieces of leather discarded by the big shoe industries.

Since they sold their wares to intermediaries, the payments were erratic. Financial difficulties often impelled them to borrow from local moneylenders at high interest rates. On top of that, there was hardly any work during the three months of monsoon. Considering these factors, a family of three putting in 8-9 hours of work every day barely earned Rs 12000-15,000 per month.

“This is still the reality for artisans who aren’t associated with Desi Hangover,” says Hitesh. “But those working with us get Rs 350-Rs 400 per pair as labour charges, resulting in a 270% rise in income. Now, a family of three can earn Rs 30,000-Rs 35,000 per month. What we did was to introduce modern practices to a quaint shoemaking process that enabled the community to make standard and scalable products,” he adds.

For the founders, however, the essential task at the very beginning was to sell shoes and get real-time feedback from customers. The complaints revolved around quality and comfort: The leather was of inferior quality; the sole wore out easily and turned slippery; the feet slipped out of the shoe.

“Since we had no idea about the industry, we roped in experts to deal with customer pain points. It culminated in product innovations such as the foot-locker counter that kept the feet in place while preventing shoe-bites,” says Abha.

Design played a key role in enhancing the appeal of the shoes. “We hired people from NID and NIFT whose designs, inspired by global footwear trends, also factored in the capabilities of these artisans. Shoemaking is a science demanding an understanding of footwear ergonomics that most of these craftspeople lacked,” she says.

In 2018, the company set up a central production unit in a hamlet near Kolhapur for artisans to access modern machinery free of cost. The infrastructural improvements and awareness about the science of footwear contributed to both quality and scale.

The startup’s intervention was keenly felt in the growing participation of women who comprise 50% of the workforce. “One needs to visit that hamlet to witness the obvious signs of prosperity, where double-door refrigerators and other household appliances are now a common sight,” says Hitesh.

Before Desi Hangover entered the scene, the artisans never had the opportunity to position their products and avail of different distribution channels despite being in the profession for generations.

Though the startup began as a digital native brand, it now operates on an omnichannel method that blends online sales with offline retailing. Aware of the growing need of durable, stylish footwear that can complement Indian ethnicwear and can be worn round the year, Desi Hangover has teamed up with a renowed retail chain that has outlets across the country. “We want to give people the experience of trying out shoes in retail stores. This strategy will eventually drive online sales,” says Lakshya. Earlier, the startup’s exhibitions in Bengaluru and Mumbai’s Kala Ghoda festival had elicited enthusiastic response. 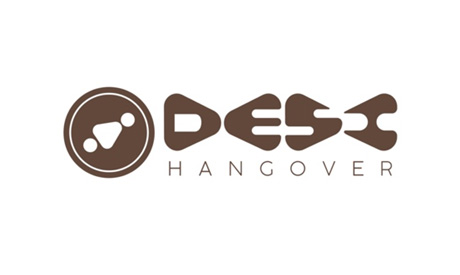 “Desi Hangover has been selling internationally since 2015 with Malaysia as their first market. Since then, we have had exhibitions at Singapore, US, and Dubai,” he says. The company operates in the mid-premium segment catering to the middle-class/upper middle-class and has tremendous growth opportunities. The Indian footwear industry is expected to grow 8 times by 2030 and is estimated to reach $15.5 billion by 2022, from $10.6 billion in 2019. India is the 2nd largest producer of footwear in the world.

Social Alpha invests in technology-driven, impact-first startups. Desi Hangover leverages technology and traditional craft to co-create a range of ethnic footwear that is of superior quality, sustainable, and enables creation of livelihoods.

“Desi Hangover team has demonstrated that sustainability is as much about protecting Mother Earth as it is about de-risking the livelihoods of poor and marginalised sections of the society. At Social Alpha we are proud of our portfolio companies as they continue to demonstrate business case for sustainable consumption creating triple bottom line impact,” says Manoj Kumar, Founder and CEO of Social Alpha.